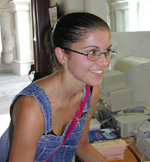 … we didn’t have really any tasks, and actually I think that the project was missed in a way, probably I had some different ideas about what a project is, and in particular about what an Evs project is and means. Actually what we were asked for, at least at the beginning was to work in the bar of the club during the concerts: we had to sell drinks, and sometimes we had to clean the day after. Later we didn’t work too much there, because we were working on something else (for a period), and so we reached a kind of deal with our responsibles about working in Menza (the name of the club); in summer they “opened” a youth centre and once a week we had to keep it open, actually we had just to clean or buy the stuffs for the bar…

…after a long time when I was trying to develop something, trying to develop at least some connections between Slovenian and Italian organizations, trying also to involve my organization in it, (but I don’t know if they understood this, because I think they had the impression I was just concerned on doing stuffs for my self, or for my life after Evs…

…we always got the money, we had a flat and no problems with it, we got the language course, and they had been careful in looking for it. But our mentor was also our personal support, and this is not written in the Evs rules, isn’t it? We didn’t get any particular skill, about what we could have learnt in the project was on the paper, we didn’t learn. But of course I learnt something as personal experience, I learnt something about me, I discovered something, I met a lot of people…

Practical arrangements were ok, the integration wasn’t always an easy process, but sometimes I feel the same also now when I’m back home, and I felt it even before. Yes, the “integration” is difficult always and everywhere.
I think the community around me gave me some stimulus to find other ways, other things to do, to try to develop something more personal, to have the will to start to go on some other directions; with community I mean the people I met out of Menza; … There is a core community in Metelkova and in Menza that appear really open to everything and everybody, but I got the impression it wasn’t exactly like this. .. but Metelkova was really a great place, and I think it can offer great things and a lot of ideas or opportunities…and it needs new people, the volunteers could be, but not the volunteers alone, they need to be in a project.

… my permanence in Ljubljana, even though quite suffered, was good and I learnt a lot about me, personally. It was like a test, I mean now I know that I can go somewhere else again, because I feel I would be able to, but I would go with all my mistakes, fears, all what was with me in Slovenia, because from it I learnt. I’m less afraid now of my weaknesses, of myself.
Of course I liked to be in a city like Ljubljana and to meet so many different people, and to have a life different than what it was my life, I liked this.
But I had a different idea about Evs, I really wanted to get also something at the professional plan, I needed it, I wanted to do it for this reason, maybe I didn’t understand it well, and I was too much full of expectations…I learnt also this!

This project needs a sending organization, a volunteer, an hosting organization, and two national agencies, they have to “work together”, they have to keep in contact, they have to do something, all of them, to have a good project, to built something…but it’s so difficult, and the final balance of the activities it’s more “quantitatively” important than qualitatively, because otherwise the monitoring between all the subjects involve in it would be more “real”.

The presentation of the projects on the data base is important, the exchange of infos between the 3 main subjects also ( I understood this later), and it’s important that everything it’s clear and the we call the things with the name they have. It’s important to say how the things are, for everybody.
Some of the people who left my Country to go for their Evs, at the same period when I had mine, were and are really satisfied, and they had a great experience; some others did not. I think it would be good to work and to find solutions and plans for both. Otherwise there are just a lot of rhetorical words in the building up of a European consciousness.